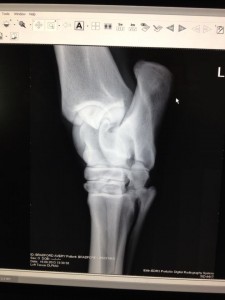 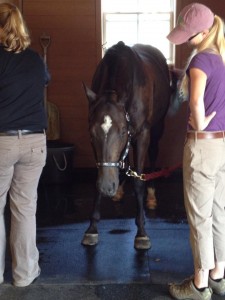 Since early June Avery has been lame.  It’s not been dead lame but a subtle lameness that you can feel when riding him.  We started him on SmartFlex II over a month ago after it not going away on it’s own and when he stopped working through it undersaddle with little success.  Being stumped on what to do next, we consulted with our barn’s veterinarian and it was decided that Avery needed to have a lameness work up with x-rays.

After saving for a few weeks and a massage for our fearless equine, Avery finally had his work up today at Piedmont Equine Practice with Dr. Davis.  They did flex tests and he vetted lame on his back left.  After x-rays of his stifle, hock, and fetlock the findings were found that he had slight arthritis in his hock (nothing to be concern with as it was very little) and he did not founder on his right front.  Dr. Davis is certain that it’s not Avery’s hocks, but his stifle and Avery had his stifle injected.

Cross your fingers it works!  Avery is on stall rest tonight and is off 3 days before returning to 3 days of very light work.  Dr. Davis said to wait 2 weeks before deciding if the injection was a success or not.

Avery is Available for Lease
SCS Is On The Move