Christina started riding in 1992 under Priscilla Perks at Quad J Farm in Fredericksburg, Virginia, later changed trainers to ride under Teresa Seay at Hazelwild Farm  (2000) in hunters.  During her junior year in high school, she started working at Hazelwild Farm in their lesson barn where she was responsible for everyday care of 52 plus horses.  She rode on their interschool team for a year and worked with University of Mary Washington’s equestrian team as a groom since they rode out of Hazelwild.  Christina would show from time to time for fun, but never became serious about it.

Second Chance Sporthorses LLC is the brainchild of Christina and was formed in spring 2012 as a way back into horses after a 10 year absence.  Having a few horse savvy friends helped spur the idea along after seeing the need to bring along fresh off the track Thoroughbreds in the area.

SCS is currently evolving into something new and refreshing! 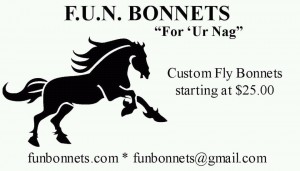