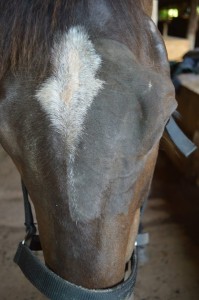 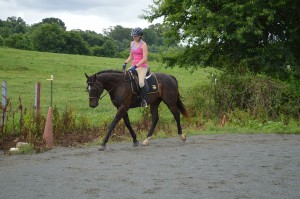 Another, and hopefully final update after his visit to Morven for emergency treatment.  Avery has returned to work!  Yesterday morning before it got too hot to ride, Kimberly rode Avery.  He was such a rockstar!  He acted as though he’s never had the time off and got right down to work.  We are bringing him back slowly, so Kim worked on stretching and collecting at w/t/c.

It’s looking like Avery will be able to attend Morningside Training Farm’s CT on the 20th.  We decided yesterday that he will do the full CT instead of just dressage tests.  It will be the first time he’s jumped off farm.  We are excited!

Again, thank you all who donated and your kind words.

Avery update!  Took a picture of his face yesterday.  The hair is starting to grow back and the bump has decreased in size.  If you increase the picture (or if you can’t, go to our FB page, the same picture is posted there), the bump is right under his star underneath the small wart on his face.  The area is no longer tender and he’s back to loving to have his face scratched.  His favorite thing!  He’s looking a bit beat up with bite marks and fresh scratches from obviously being in a fight.  Yesterday, I did find him hanging out in the run-in in front of a fan with the “cool kids”, which was unheard of behavior just a few months ago from him.  Hopefully his rise in the herd hierarchy is done and he doesn’t continue to get into fights to hold his position.

Cross your fingers, tomorrow is his follow up appointment.  Hopefully we will get the ok from our vet that he can go back into work.  We have a goal of entering him in a CT or dressage tests only on July 20th.

A long overdue update on Avery.  He’s doing well!  The bleeding has not returned and he’s back to eating normal size meals.  I did get a report late last week that he is picking fights with a dominant mare in the herd.  I do think she’s who kicked him, but it’s to be expected in a large herd turnout.  We’ve explored the possibility of private turnout for him, but currently SCS cannot afford it, and this would be the ideal situation for him.  Avery has another week off to recover.  He has a vet appointment next week with our local vet to get the clearance to allow him to return to work.  I am hoping to go out on Thursday to see Avery and to spoil him with treats.  I hope to get a picture of his shaved head and will report back.

I want to say a special thank you to all that have donated!  Each donation has helped lessen the burden.  Please continue to share to show your support, it means the world to us.

Avery has continued to not bleed even with turnout!  This morning Sam, our barn manager, reported that he was happily grazing with the herd!  Our decision to allow him some turnout was a smart one.  He’s back to being our happy, laid back Avery.  His appetite hasn’t returned to normal, but he is not colicky.  He was not interested in his morning breakfast yesterday (just in getting out with the herd) and ate a little last night.  We are not worried about it yet since he is on bute and bute is horrible on their stomachs and he already has ulcers.  Once he’s off bute and his appetite does not return, then it will be a cause for concern.

Again, thank you all for your kind words and encouragement!  We feel Avery will make a 100% recovery, but it’s still early yet and I don’t want to jinx anything yet.

Avery’s bleeding has stopped!  He’s definitely feeling better while on his meds, since he got out of his stall last night.  He was found wondering the barn this morning by our barn manager, Sam.  It appears he spent the night hanging out by the turnout gate so we decided for his mental wellbeing to turn him out with the herd.  Sam will keep an eye on him today to make sure the bleeding doesn’t start again.

I want to say thank you again to everyone whose sent us kind words and to those who’ve donated!  We are amazed at how many people have shared our plea on Facebook and feel honored to be apart of the OTTB society!

We need your help!  Avery was rushed to Marion duPoint Scott Equine Medical Center (locally known as Morven) this morning to undergo emergency treatment.  He had been bleeding from his left nostrial for over 24 hours and it appeared last night that he had been blowing clots.  Avery was scoped, x-rays were taken, and blood work was done.  Everything came back normal or within limits.  Still no answer to the cause of the bleeding other than it was idenitifed to be coming from his sinus.  They started to clip him up for a nasal exploratory surgery when they found a bump right over the area that they previously guessed was where the bleeding was coming from and it was tender to the touch.  What they’ve guessed is Avery was kicked in the face and the kick traumatized his sinus.

Avery is not out of the woods yet!  He is back home on stall rest per doctor’s orders.  SCS is currently a non-profit company and our funding is very low.  We need your help to pay for his medical bill.  Whatever you can donate is enough, forwarding this post on to others, and rallying behind us is all we are asking for.

Thank you so very much!